Our Links with the Community

See also Eco in the Community on our Eco Council page

Our facilities are available for hire to the local community for either single or repeat bookings.  Please find our Hire Agreement on our Policies page

I was very impressed with the school’s reputation in our community.  (Parent Survey 2019)

We took part in this year’s Scarecrow Competition and are pleased to have won fourth place!

Our scarecrows are now spending some time in the garden of The Grange, together with the other scarecrows created as part of this competition. 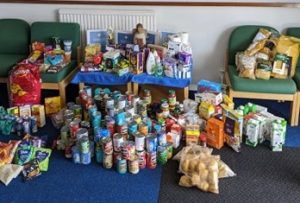 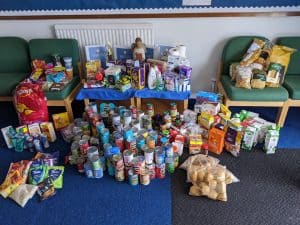 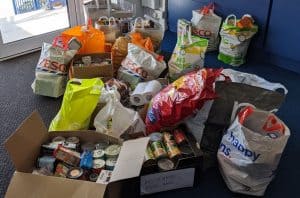 Our work with Whitehawk Foodbank

The Whitehawk Foodbank have reported that over the last few weeks they have seen demand for food parcels quadruple and are increasingly desperate for donations. Our Lady’s have set up a donation point for parents and the community of Rottingdean to drop off donations which are then delivered to the foodbank fortnightly. Thanks to the generosity of both the school and local community, in the first delivery run we were able to donate an amazing 19 bags and boxes of food and toiletries for those families that are in need.

We will continue to collect and deliver food for as long as necessary so if you have any unwanted items you can either drop off at the school on Monday to Friday between 9-3pm or alternatively email [email protected]k,  and we can arrange a collection.  #

Please click on the link below to see the amazing work the Whitehawk Foodbank do and the various ways in which you can offer your support. 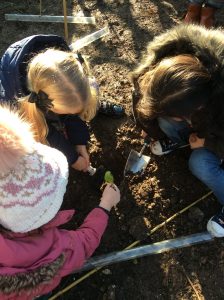 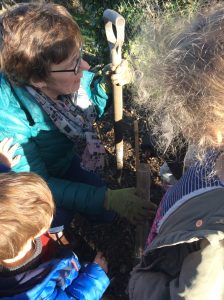 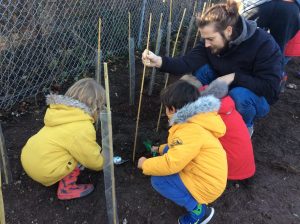 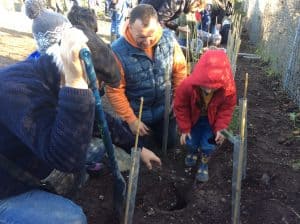 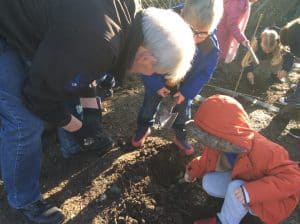 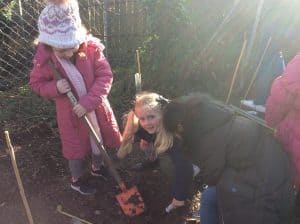 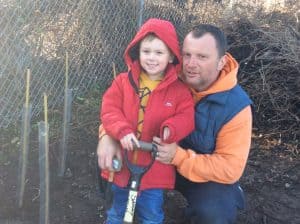 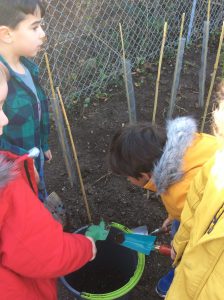 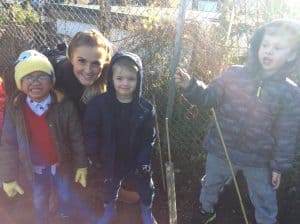 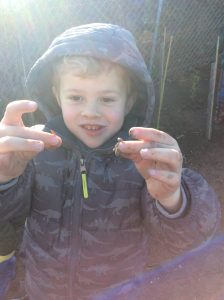 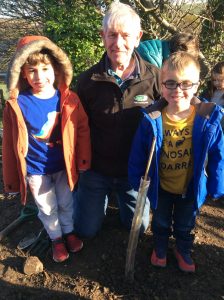 Thank you to all those parents, carers, grandparents and neighbours who came to help with our tree planting mission! We successfully managed to get 105 saplings safely into the ground; 25 – 30 of the trees were placed alongside the path to make a “whisper walk”, and the others will create a hedge and wildlife habitat as they grow. The children were amazing and thoroughly enjoyed the experience. We were lucky to have the help of Miranda who will be leading our FOREST SCHOOL, Katie from Sussex Wildlife and Libby, member of the local Deans Conservation Group. With their expertise and guidance the saplings all found the right spot and location. It was fantastic to see so many parents, as well as neighbours and members of the local community with all their tools.

A Visit from Rottingdean and Saltdean Lions

On Monday 25 November, we were visited by two members of Rottingdean and Saltdean Lions Club, Geoff Rhodes the Lions President and Andy Wavell. They generously presented each child in Reception with a picture book to keep. The book “Happy to be me” by Emma Dodd is a rhyming book with a body positive theme celebrating all the wonderful things that make us US! The children were very excited to take their books home, and we hope this excitement of books continues with them throughout their lives. A HUGE THANK YOU to all Rottingdean and Saltdean Lions for their generosity.

We are looking forward to taking part again at this year’s Primary Schools Christmas Carol Concert on 2 December at The Brighton Centre.

Links to songs and lyrics can be found here. https://ourladyoflourdesprimaryschool.co.uk/christmas-carol-concert/ 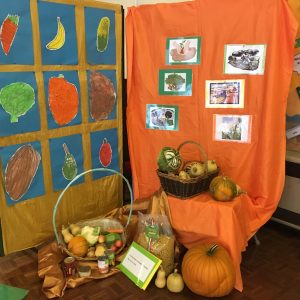 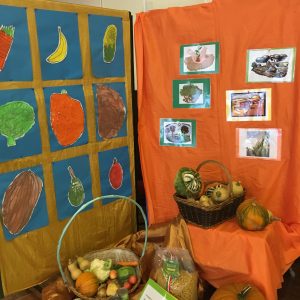 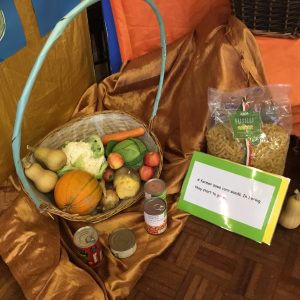 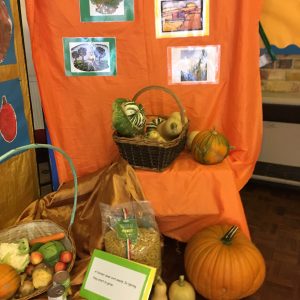 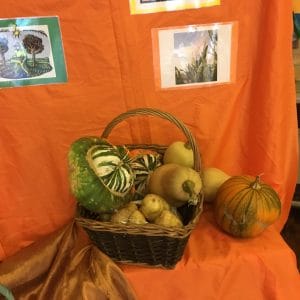 Each year Our Lady of Lourdes celebrates the Harvest Festival by donating gifts of food to give to worthwhile causes. This year the school donated tinned and dried foods and toiletries to support the wonderful work of the Clock Tower Sanctuary.

The Clock Tower Sanctuary supports young people from 16 to 25 who do not have a home of their own , they are provided with hot meals , somewhere to have a shower and laundry facilities, access to computers and the internet and support services. We were very excited to have Frances Duncan the CEO who came to visit the school and to talk more about the work of the Clock Tower Sanctuary and how they help the lives of young people by providing a safe place to meet up with their friends and somewhere to turn if they need help.

Rottingdean in Bloom and The Budding Foundation

The school is involved in this year’s Rottingdean in Bloom (RIB) competition. We have been working closely with Helen from the RIB.  The wildlife area is being tended to by the Community Payback team at the weekends, and Mr Golding has been coordinating their great efforts. We are really appreciative of all they are doing. Judges for Rottingdean in Bloom will be coming to our school on 4th July to look at what we are doing and meet with the Eco Council representatives.

We have also been in contact with Tates Garden Centre, Hassocks and a charity based there run by Clive Gravett called The Budding Foundation. This charity works with Tates to support children’s projects in the community, and Clive has been very supportive in helping us. He knows that all the children will be involved in looking after the 30 troughs of flowers that have been donated to the school by the charity via Hassocks Garden Centre. More than that, it will be used to support a number of our children with specific need. Thank you very much, Clive! We hope to invite him to the school in the near future when our project is near completion.

A huge thank you to Mrs Philbrook, Miss Anscombe and Mr Golding for organising for our children to attend the 75th Anniversary Service of D-Day on The Green, Rottingdean.
Here is a message from Dave Bull, who helped to organise the event:  ‘Thank you for attending today’s service on the green. The attendance was fantastic and the children really made the event so very special. It takes a lot of effort for your school to escort the children down and supervise them, which was really appreciated. Again a massive thanks on behalf of the village and branch. Please pass on our thanks to your fantastic pupils and staff.’

We had a great day, joining in with this amazing community event.  Many thanks to everyone to all the staff, parents and children who contributed to making it happen, running the workshops, helping with transporting and carrying our cheetah, facepainting etc etc.  Special thanks to the children who were impeccably behaved and great ambassadors for our school.

Yes, it’s that time of year again when we start to prepare for the parade! The overall theme for this year’s parade is folk tales from around the world. Our Lady of Lourdes School has a traditional Zulu story called ‘The cheetah and the lazy hunter.’

Here are some photos from our workshop where we worked together with parents, children and staff to prepare our costumes.

40 children from Years 3 and 4 performed in a dance at the Brighton Dome as part of the annual Lets Dance celebrations. The children had worked incredibly hard in our rehearsals and as always, rose to the occasion on the night, with a truly outstanding performance. We were extremely proud of them! We also need to say a huge thank you to Helen Snow for choreographing the dance and giving up her free time to come and help the children practise. Thank you also to the parents for providing wonderful costumes and make up! It was a great evening! Thank you also to Miss Cordell and Mrs Philbrook.

OLOL entered a competition held by 7billion ideas and Rottingdean and Saltdean Lions called ROAR 2018.  We competed with over 50 schools from around Sussex and Kent. We had to think big, dream big and come up with an idea to change the world. The children were asked to test their imaginations and in groups of 3 or 4 they had to promote and pitch their product/idea to change the world; this included:

On Thursday 6th December our winning team from Year 6 went to Wakehurst Place to compete and were judged the overall winners!  This is the winning team’s idea:

“Our idea for ROAR is an ice generator that is powered by plastic. The life changing idea behind B.E.N (Breakthrough, Ecology, Network) is to reduce plastic in the world without taking salesman and saleswomen, who sell plastic bottles, out of business, and in addition, to obviously add more ice to Antarctica and The Arctic to save all arctic and antarctic animals/wildlife. At the very top of Ben there is a small chute, where you insert the plastic, which has been thrown into the sea or other reserves. Once that is done you must turn the dials, depending on whether you want snow or ice; one dial to choose how much snow comes out and one dial to choose which direction the snow/ice comes out from.”

On 5 November, we celebrated our annual Autumn Extravaganza – an event, including firework display, organised by the Friends of Our Lady of Lourdes.  This was a great celebration for the whole school and well attended by the wider community of Rottingdean and surrounding areas. 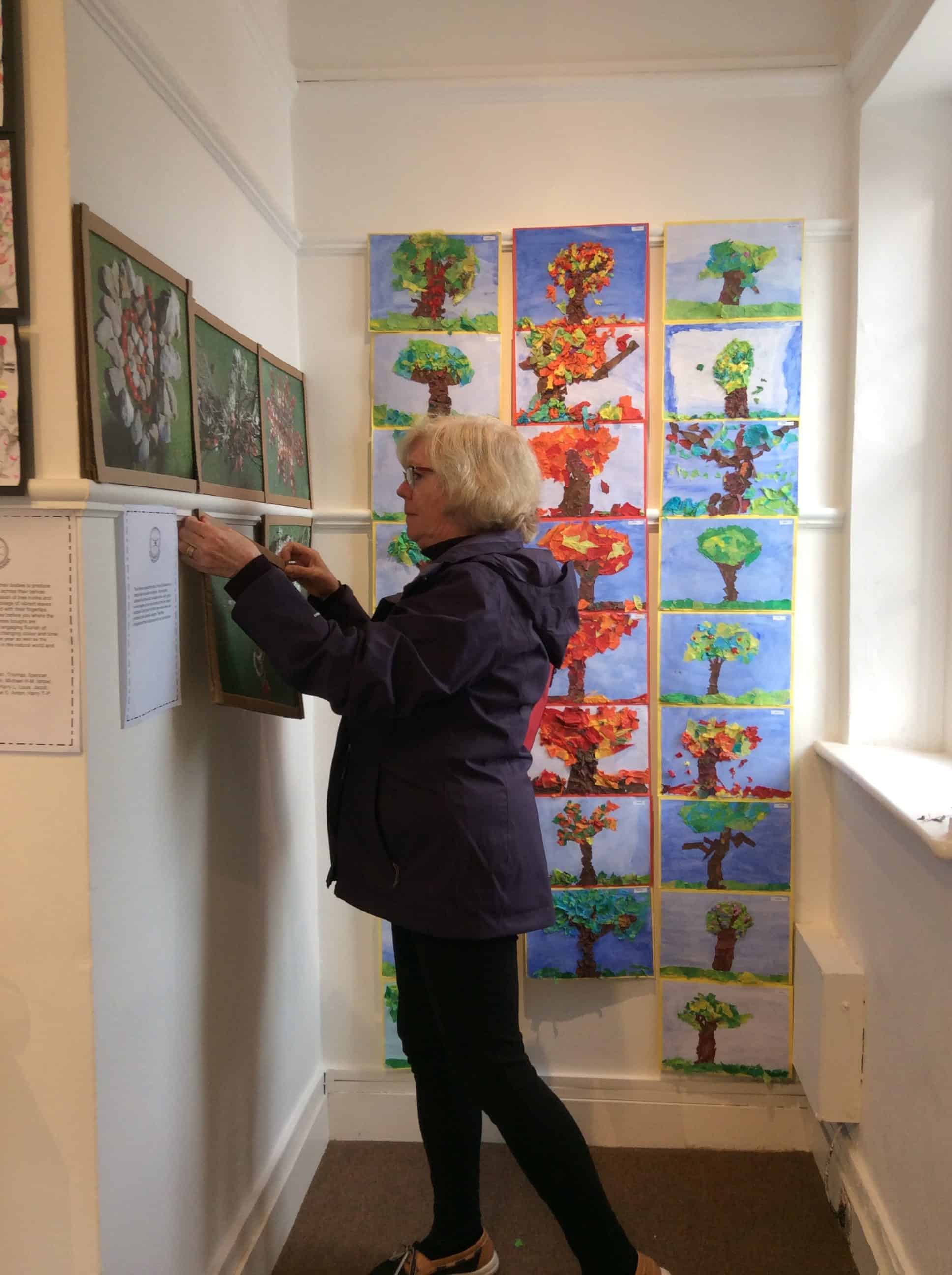 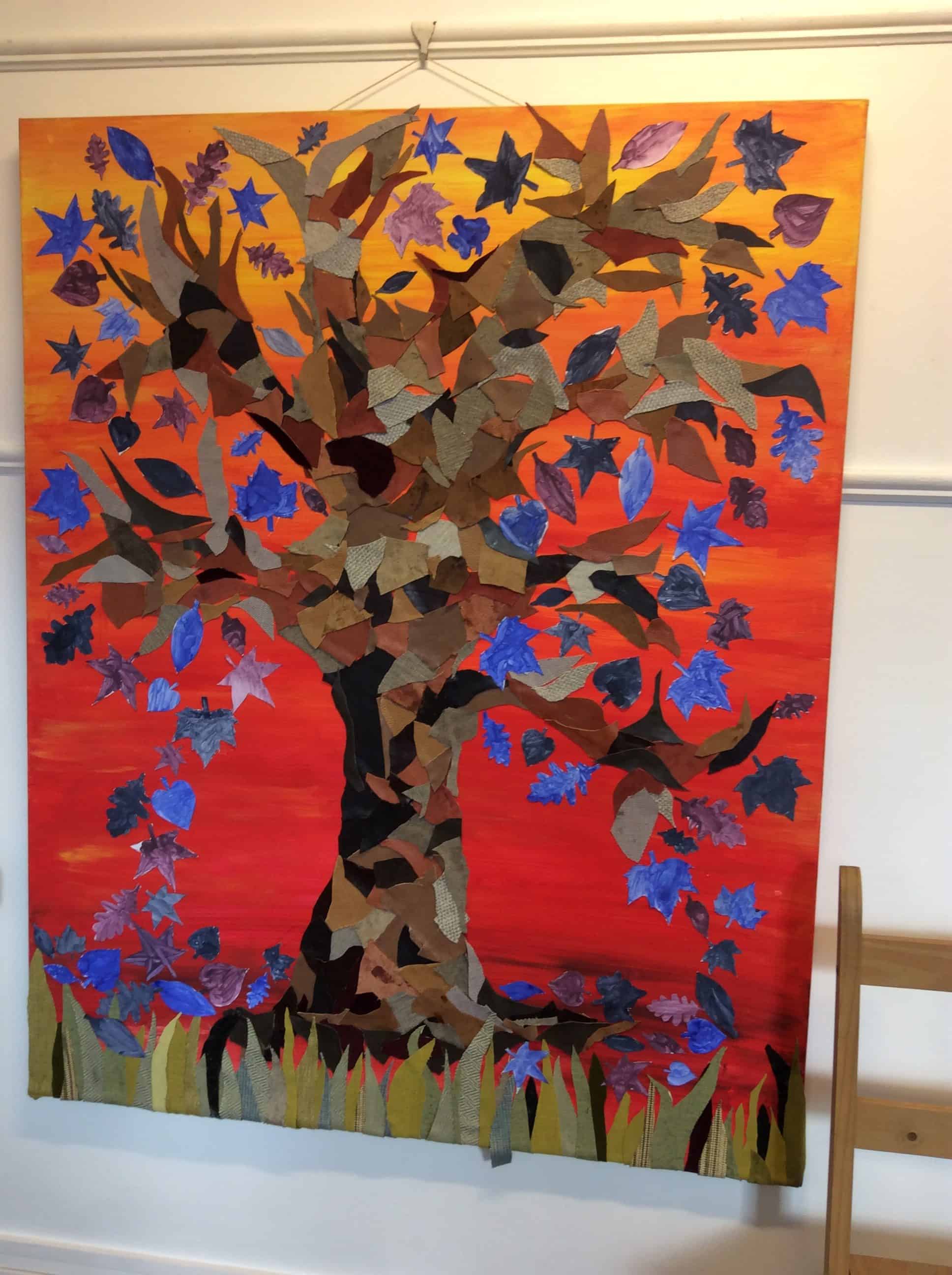 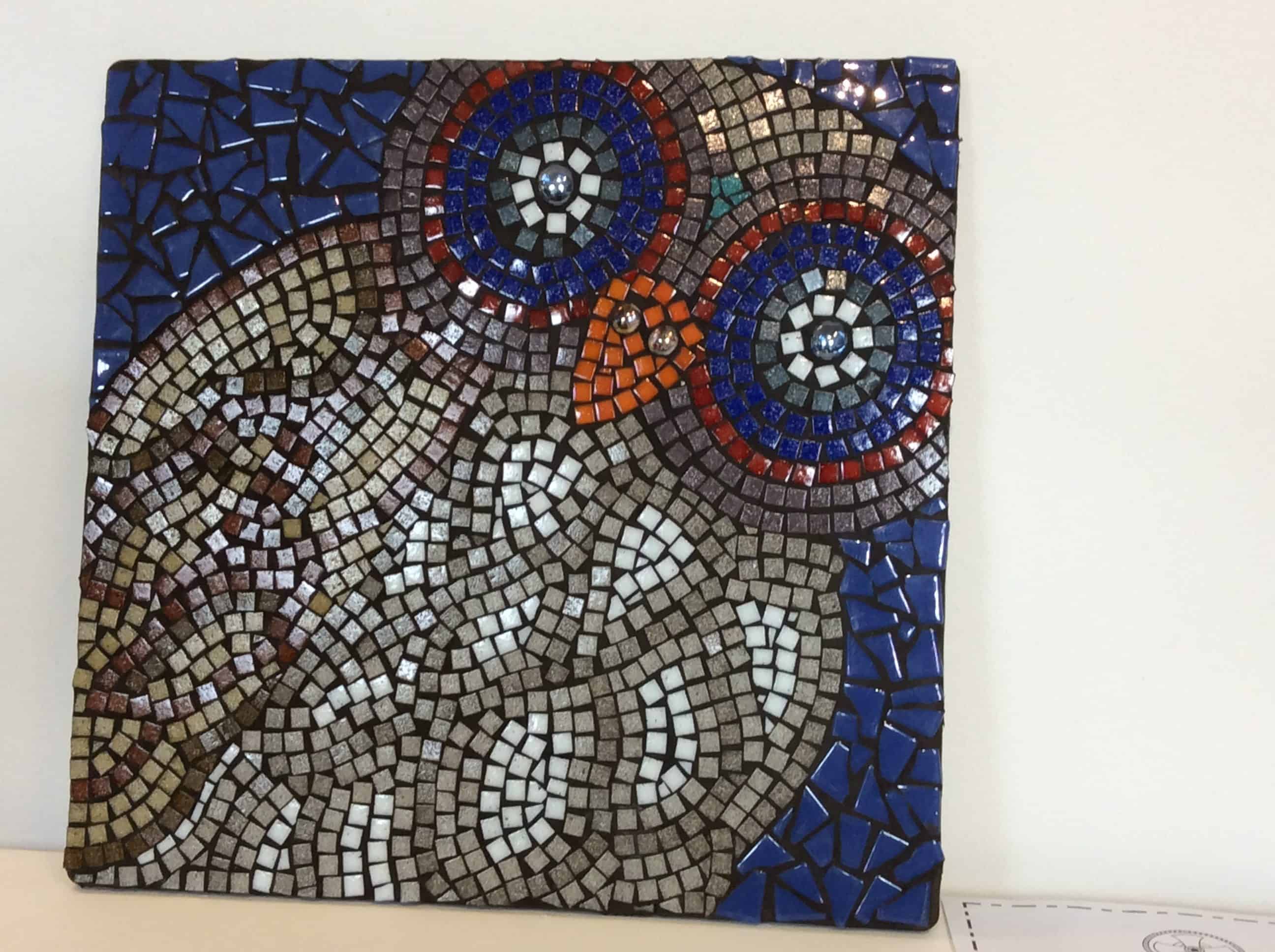 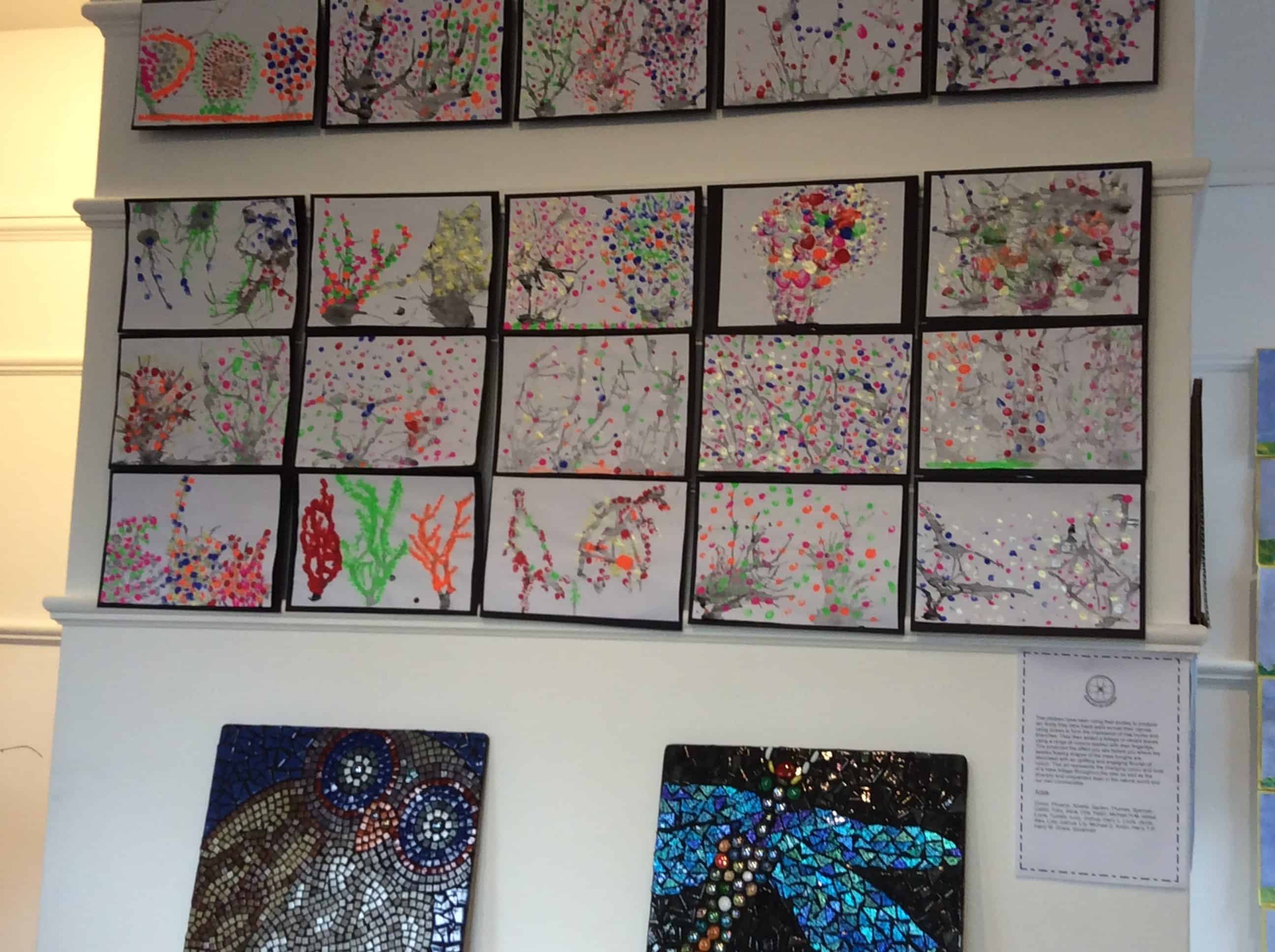 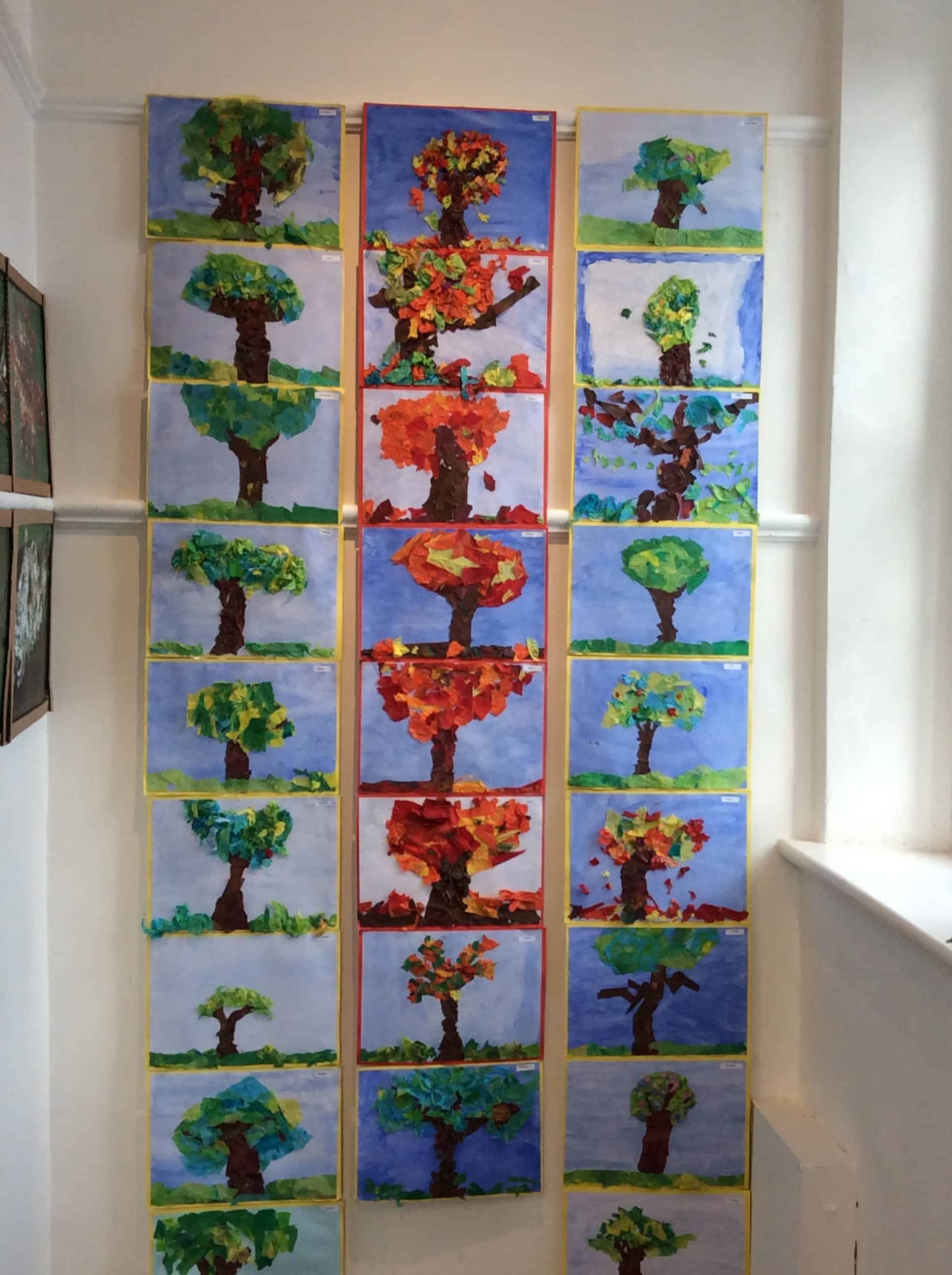 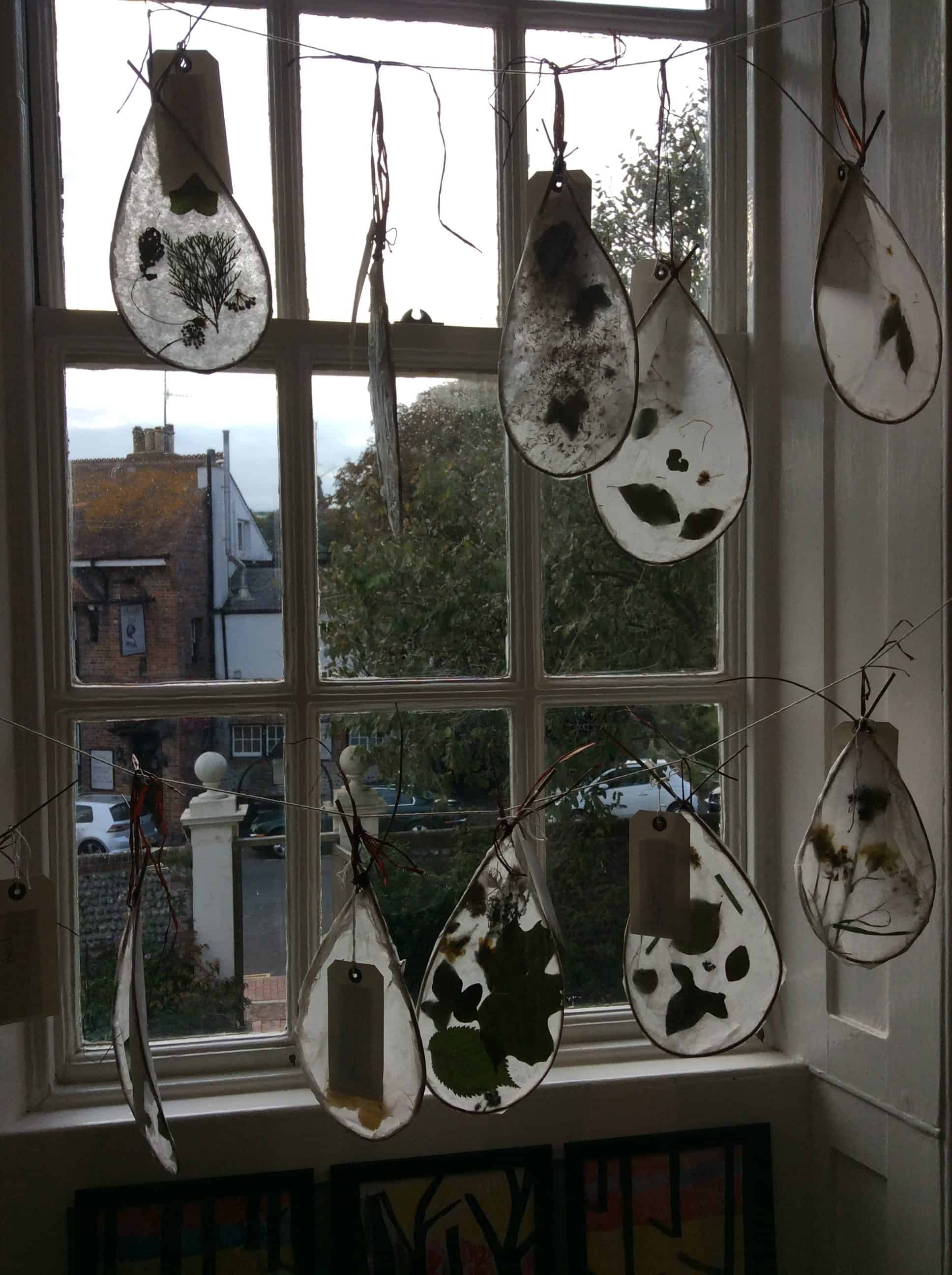 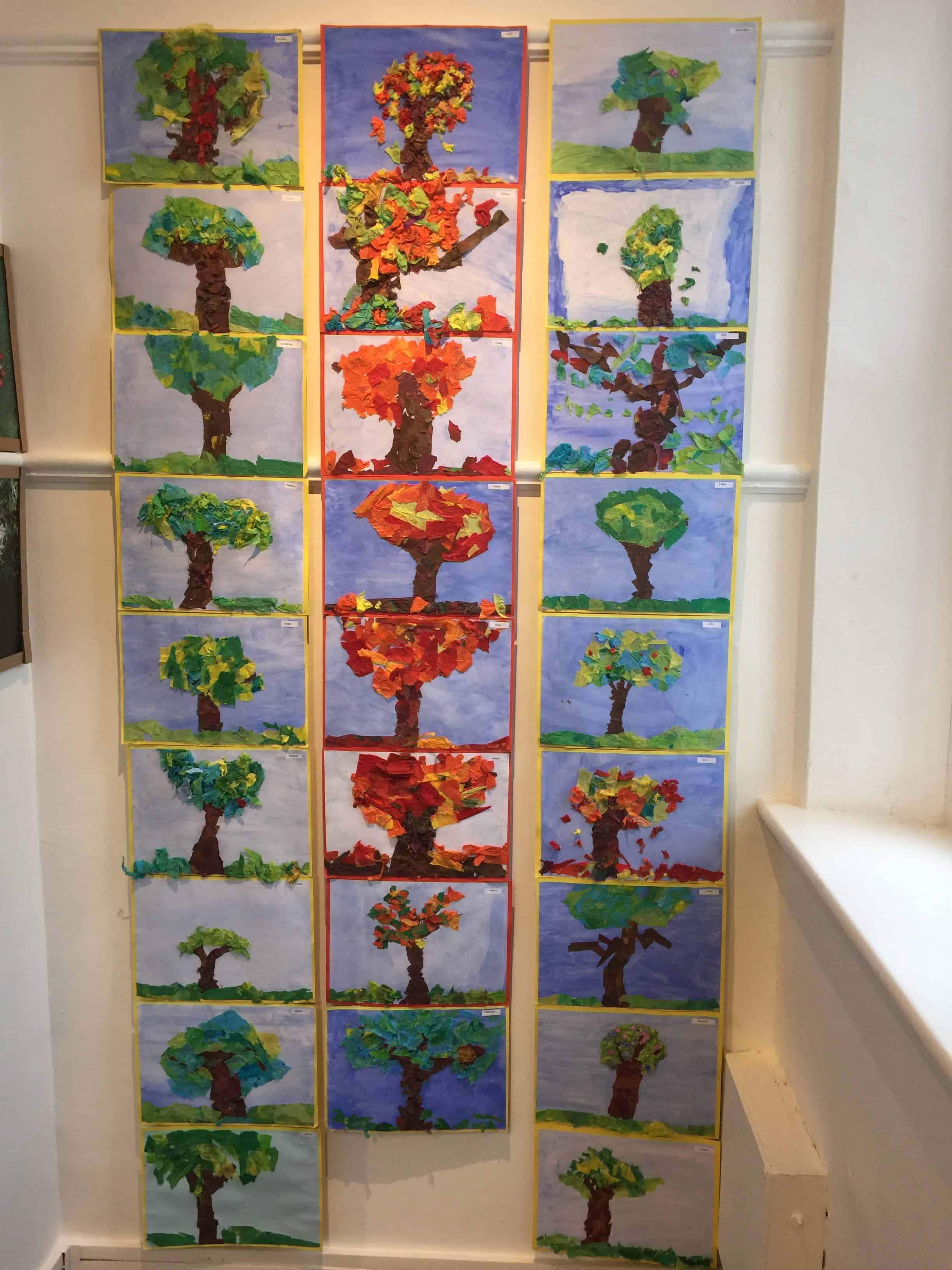 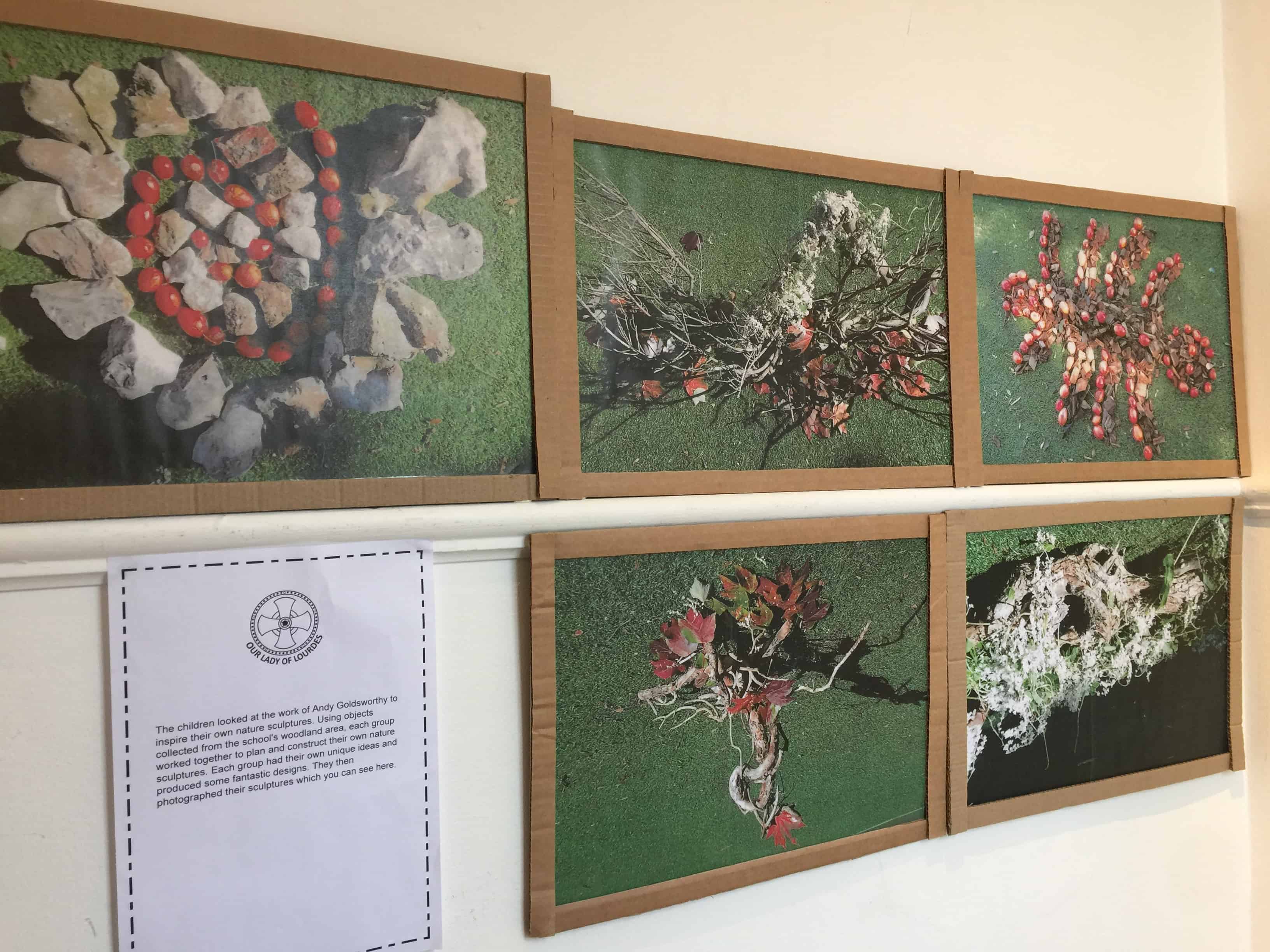 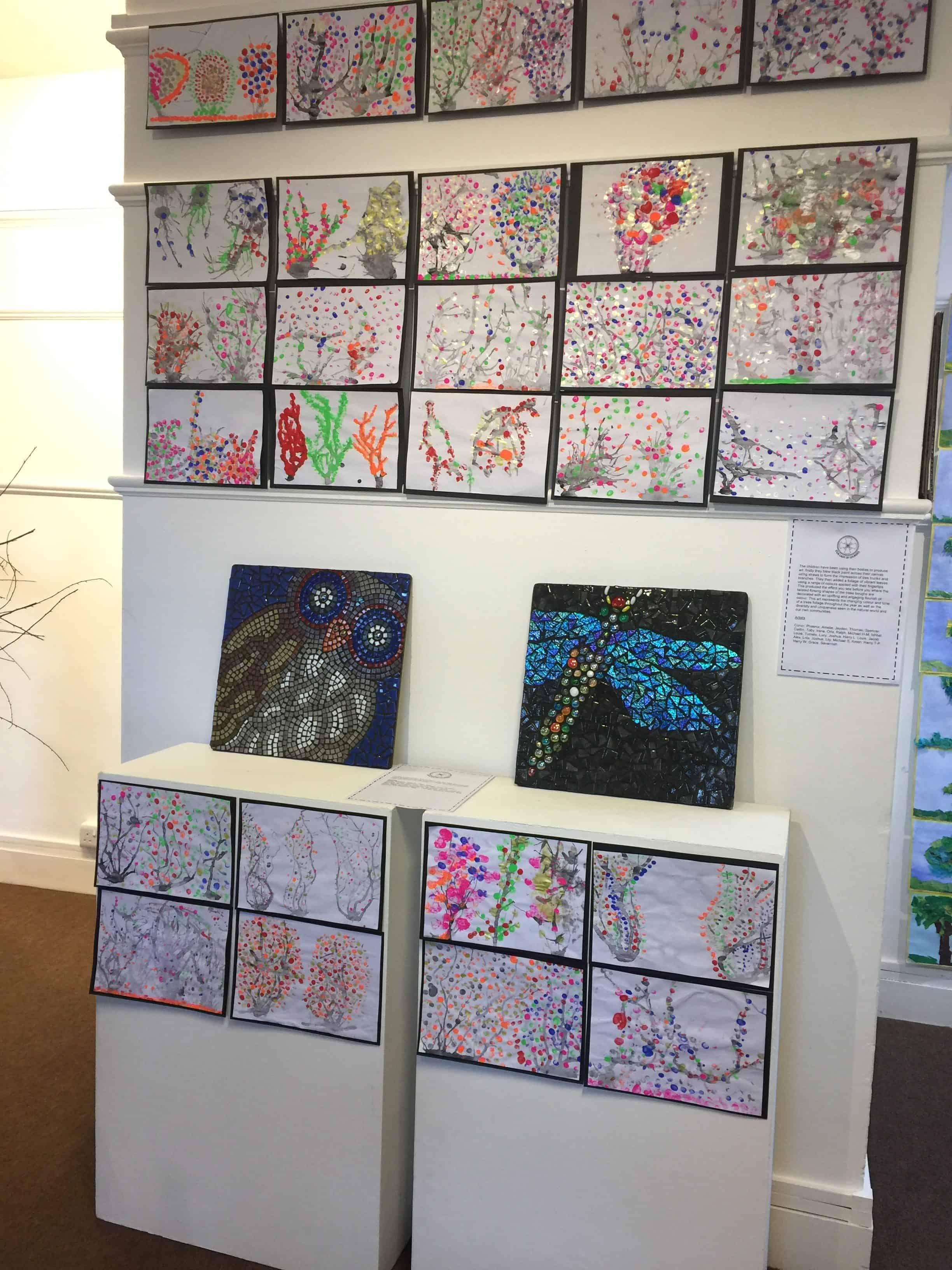 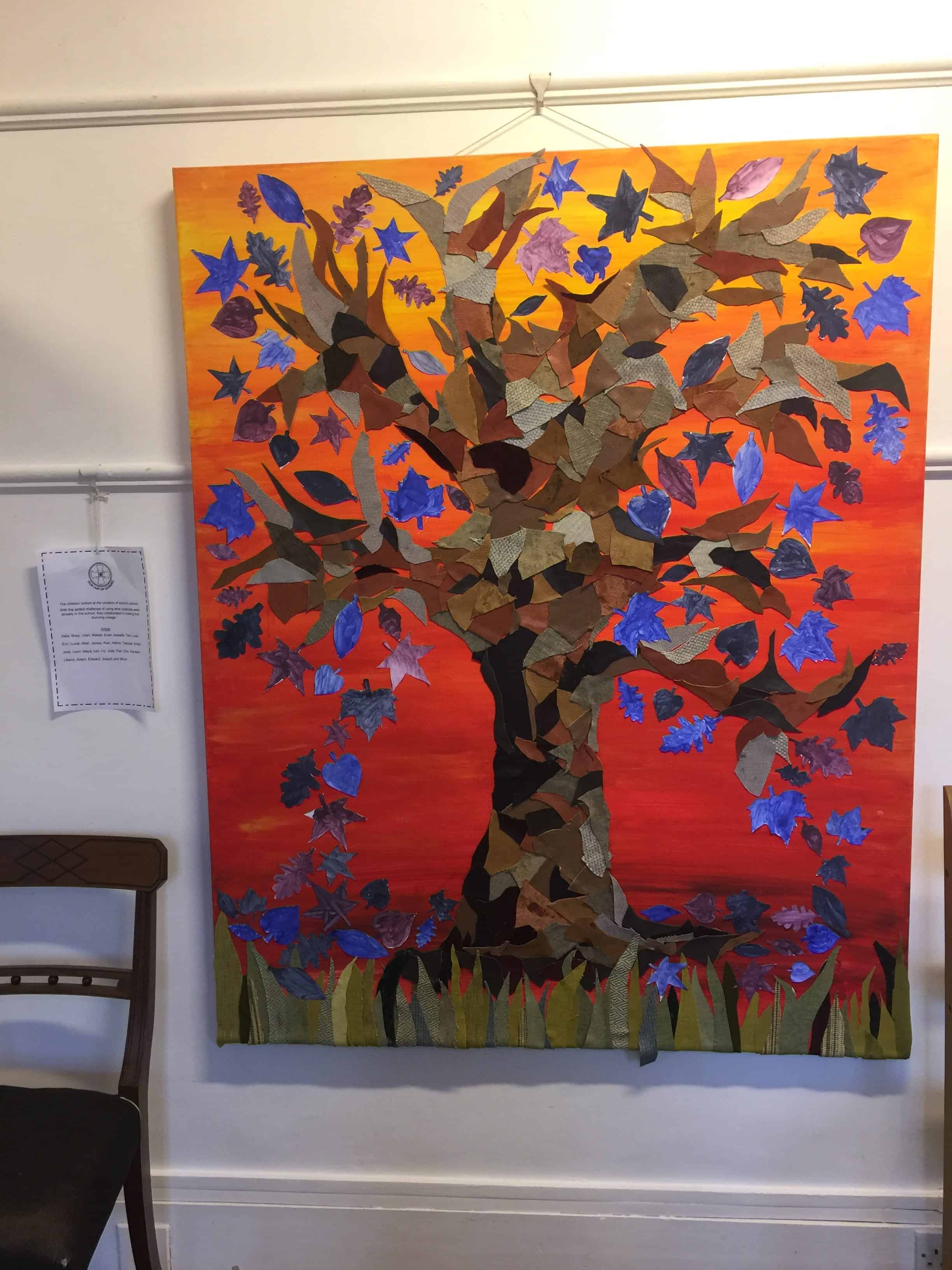 “Into the Woods” Schools’ Arts Exhibition

From 2 – 14 October 2018, Our Lady of Lourdes, together with three other local schools, participated in an ambitious and unique exhibition at The Grange Art Gallery.

Pupils of Our Lady of Lourdes Catholic Primary School, St. Margarets Church of England Primary School, Longhill High School and Downsview Link College contributed 2 and 3 dimensional artwork with the theme “Into The Woods” .

“Two years earlier, Our Lady of Lourdes School exhibited pupils’ art work here at the Grange,” said Rob Upward (retired head teacher and Rottingdean Preservation Society committee member). “I was surprised by the degree of interest shown by the children exhibiting their work and by their parents. So, from this came the idea of holding a schools’ exhibition.”

The Grange Gallery responded to this innovative idea by inviting the four schools to take part; with the hope that students, by engaging with the concept of “Into The Woods”, would develop and draw out their artistic potential, become aware of and involved with today’s multi-layered art scene; and perhaps realise that art galleries are not elitist, but accessible to all.

This site uses cookies to give you the best possible experience. No personal information will be taken by us. By continuing to use this site you will be giving us consent to do so.OkRead more